With the great success of the Anycubic Photon and Photon S, Anycubic are planning to release a new SLA printer called the Anycubic Photon Zero. Priced at a mere $169 (approx £130) this makes it very affordable for those that are wanting to dip their hands into the resin printing world! Here is the info we know so far. 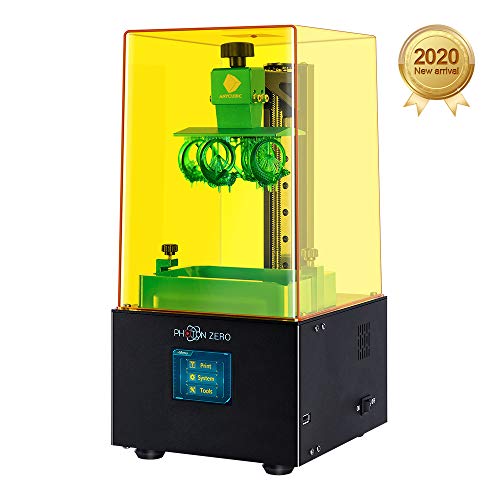 It would appear the main features of the Anycubic Photon Zero compared to the previous models is as follow.

The Z-Axis of the Anycubic Photon Zero is a combination of a linear rail as well as a lead screw. This allows for stronger stability and accuracy while printing.

It would appear the resin vat still the same material; however, it now has markings along the back to give you a visible indicator as to how much resin is left in the vat.

The Photon Workshop software is now on version 2.1.20. Compared to the previous versions that shipped with the Photon/Photon S, more tools are essential to resin printing preparation. It is also stated that in 32 seconds, an 80mb file can be sliced.

You wouldn’t expect everything to be plain sailing, would you at this price point? To cut the cost to make the Anycubic Photon Zero more affordable, they have sacrificed on the LCD.

It has a low resolution of 480x854p of which as a result increases the pixel size to 115microns. This is much more than that of the Photon which has a pixel size of 47 microns. The Photon Workshop software has the option for 16x, and anti-aliasing so could be the saviour when it comes to printing.

When and where to buy?

Unfortunately, no information has been released yet as to when and where you can buy the Anycubic Photon Zero, but at least we have the price!

We are looking forward to seeing how this budget resin printer performs!

Thanks go to All3DP.com for the source of the information

Creative Commons License: The text of “Anycubic Photon Zero – An SLA printer for under £130!?” by Inov3D.net is licensed under a Creative Commons Attribution 4.0 International License.

Posted by : Michael Bird
A Techy, Foodie and Salsa dancer! Started 3D printing since 2017 and it has just grown from there! I now own approx 5 printers, which is forever growing! I love this technology!
Previous Article :