After the successful SKR E3 V2.0, BigTreeTech has now released the BigTreeTech SKR E3 Turbo! A straight swap for your Creality Ender 3 board. Read on to learn more.

As with a lot of BigTreeTech products, the SKR E3 Turbo board comes packaged in the usual branded black cardboard box. Inside, it contains the board within an anti-static bag. In addition, you get the USB cable, Micro SD card, heat sinks, spare jumpers and a small rubber duck! 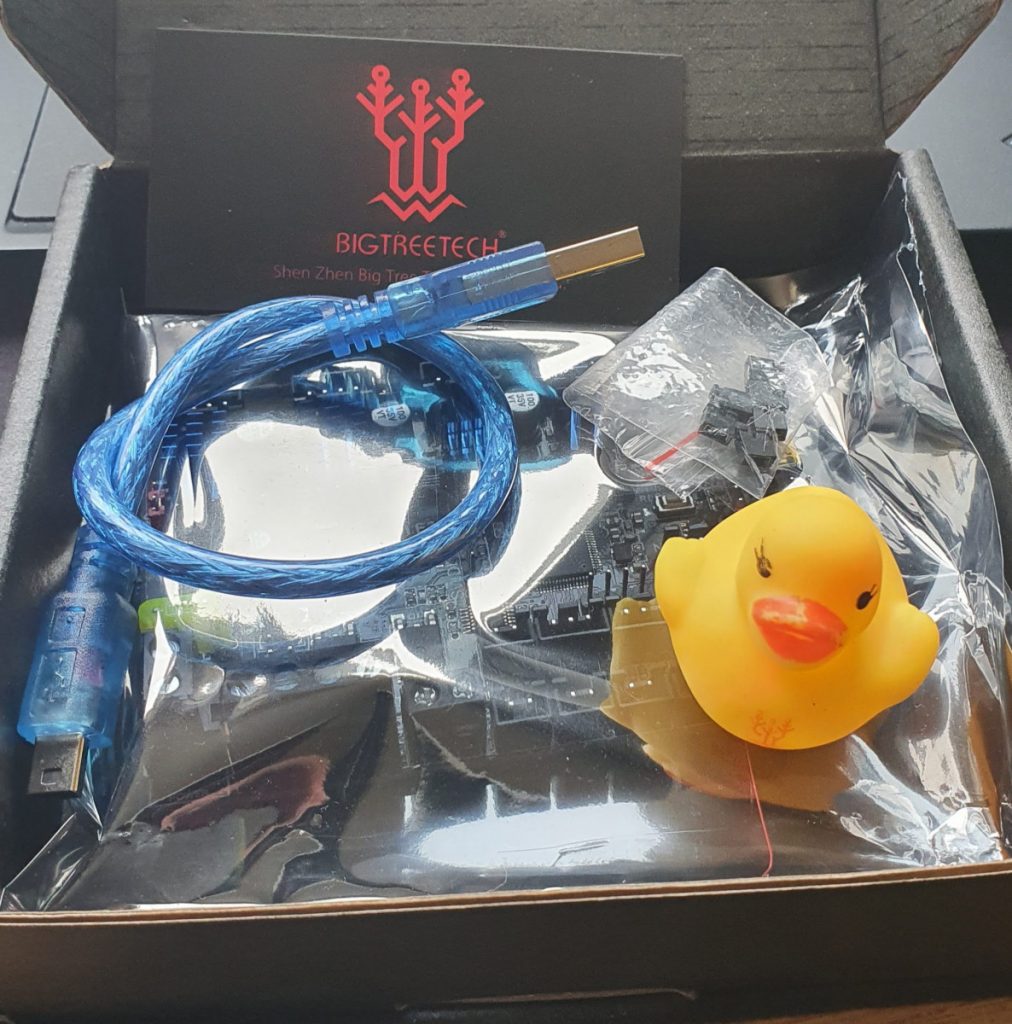 The installation of the BigTreeTech SKR E3 Turbo board is straight forward. It uses the same bolt holes as your original board on the Ender 3 and no modifications are needed. The board is slightly wider than the original. The layout of the ports is very similar to the E3 V.2 which I had installed, albeit with a few extras! The heat sinks were easy to install. Just take off the backing and apply to the stepper drivers.

The micro SD card already had the firmware installed, so it was pretty much plug & play for me! I had a 3D Touch installed, but for ease, I disconnected this so I can get printing right away! With a lack of instructions because of this being very new to the market, I took pictures of my old board so I knew what plugs were what. In addition, I labelled those that may be difficult to identify later!

Upon firing up the BigTreeTech SKR E3 Turbo board for the first time, the board was quiet (apart from my cooling fans) so, as expected, is just like the others.  Homing the printer, all moved as expected. However, I was hearing a faint whine whilst it was making the movements! I moved each stepper separately to see if it was just one making the noise, of which it was. After checking the heat sinks were all compressed on the steppers, I then re-tried and the whine disappeared. Coincidence maybe? Who knows!

Wanting to get printing right away, I started with an extruder knob. An evil minion one to be precise! This 3D printed cleanly and with no stuttering. Could this result from the board or my slicer settings? I think it could be a mixture of both, but overall, it did well!

With me being into woodwork, I opted to print a feather board for my table saw. The file is available from Thingiverse. This printed with no issues, it’s perfect! The BigTreeTech SKR E3 Turbo board handled this very well with no stuttering or pausing. I printed the knobs and mitre slots on my CR10 Mini 3D printer.

Where To Buy The E3 Turbo Board

You can grab yourself a BigTreeTech SKR E3 Turbo board directly from Amazon at a current price of £55.99. However, I’ve yet to see it available on the BIQU BigTreeTech site, so keep an eye out on there too!

What are my thoughts on the BigTreeTech SKR E3 Turbo board for the Ender 3? Well, it certainly does the job and the potential for more! With its added extras enabling you to add more to it, it can be a real workhorse. In addition, it’s easy to install, and for the basics, a good plug and play solution. With the added benefits of sole Neopixel and BLtouch components, you can customise to your heart’s content! Unfortunately, the only thing I found wrong was lack of instruction. However, this would most likely be produced with any current orders. Over time, there is no doubt I will utilise its extra features. For example, the auto bed levelling, so watch this space!

The BigTreeTech SKR E3 Turbo board. A good all-round board for your Ender 3! Does the job as advertised and with added features too! Bonus!

Creality Ender 5 3D Printer What Do We Think?