Creality 3D Printing Enclosure – Is it a cover up?

Creality makes what are arguably some of the most successful 3D printers in the CR10 Series and the Ender 3’s. However, until now, they did nothing to enclose them! – That’s all changed now with the release of the Creality 3D Printing Enclosure.

3D Printing will almost inevitably lead you to enclose your printer in the search for better quality prints, smell control, noise control, or just plain dust control. Many people opt to make their own 3D printing enclosures, often using the Ikea Lack tables, or a Computer Server case as our own Michael has done. Me, I was looking for a ready-made solution, there’s that laziness again.

There are several things to consider when looking at enclosing your 3D Printer. The ambient temperature and what are you planning to 3D print? Do you need extra sockets to run enclosure fans or lights? It all comes down to what you want to do. Do you want to build a custom enclosure or opt for something a little quicker and easier?

I’m lazy. I have 9 machines now, having recently bowed to pressure from the wife to downsize. This meant getting rid of the CR10S5 mainly as it was the least used machine. Having regained that space, I decided it was time to enclose the CR10S Pro 3D printer using a 3D Printing Enclosure. My prints were already very good! However, I wanted to experiment more with PETG and ABS, so I needed an enclosure for a more stable printing environment.

2 different sized versions of Crealitys 3D Printing Enclosure are available. A smaller one for the Ender 3 and Ender 5 3D printer. And they market the larger one for the Creality Ender 5 Plus, CR10 V2, and the CR10S Pro.

Both lined with a heat-reflective pure aluminum material bonded to a flame retardant cloth, the front panel unzips to allow unfettered access to the machine. In addition, it has a clear panel for a constant view of the print area. Add that to using a thin wall of metal tubing for the frame, they are lightweight and offer good various access points to the machine. The outside of the enclosure features pockets to hold the tooling for the printer.

Fortunately, it can also be broken down quickly for easy storage. Ideal for those who don’t want to keep the 3D printer in the enclosure for prolonged periods. The assembled dimensions of the smaller one are 495x615x735 – hardly small! But the big one is a monster at 700x750x900! I purchased the larger one – not realizing at the time it was large enough to enclose a CR10S5! As a result, it swallowed the CR10S Pro with no effort at all. Setup takes moments. Slide the poles into the corner pieces and slip the whole frame inside the zip-up the enclosure. It’s then ready!

I have to admit I was a little curious as to the benefits of a Creality 3D Printing Enclosure. However, over the last 3 weeks, I have seen fewer failures. I can’t say I see a marked improvement in the quality of the 3D prints, but the failure rate has dropped. I have printed some small ABS components with this enclosure and larger lamp shade for my son’s room. The enclosure does a good job of containing the smell and reducing the noise of the printer. If I had to be critical of anything, I would probably include some LED lighting. However, that’s me just being picky.

Obviously the Creality 3D Printing Enclosure is larger than the 3D printer by a lot. I’ve used the space regained by parting with the CR10S5 for the enclosure, but please if you’re going to buy one make sure you have a sufficiently large and stable surface for it! Access to the cable entries and machine access is reasonable but not ideal.

I have concerns about the longevity of the electronics being inside the enclosure, meaning they are always working at a higher ambient temperature. As a result, this reduces the efficiency of the cooling fans for the motherboard and stepper motors. Only time will tell on this question. My only other concern about having the printer fully enclosed is that the cooling for the parts cooler will be less efficient as its warm air being used.

Undeniably the Creality 3D Printing Enclosure is a hit for me. The quality of my prints has improved as there are no longer any temperature changes causing issues. The printer is quieter, so that’s a plus for the wife! Above all, it’s tidy, and it keeps little fingers off the touch screen. On the odd chance, they make it into my office.

However, size is a definite downer. I think if Creality could make it adjust for the more common 3D printer sizes, it would work better. However, maybe I just want to have my cake and eat it! Overall, I like it! It’s easy to assemble and quick to access the machine. A little more work and it could be a real winner. You can purchase these directly from Creality priced at $89 for either size. 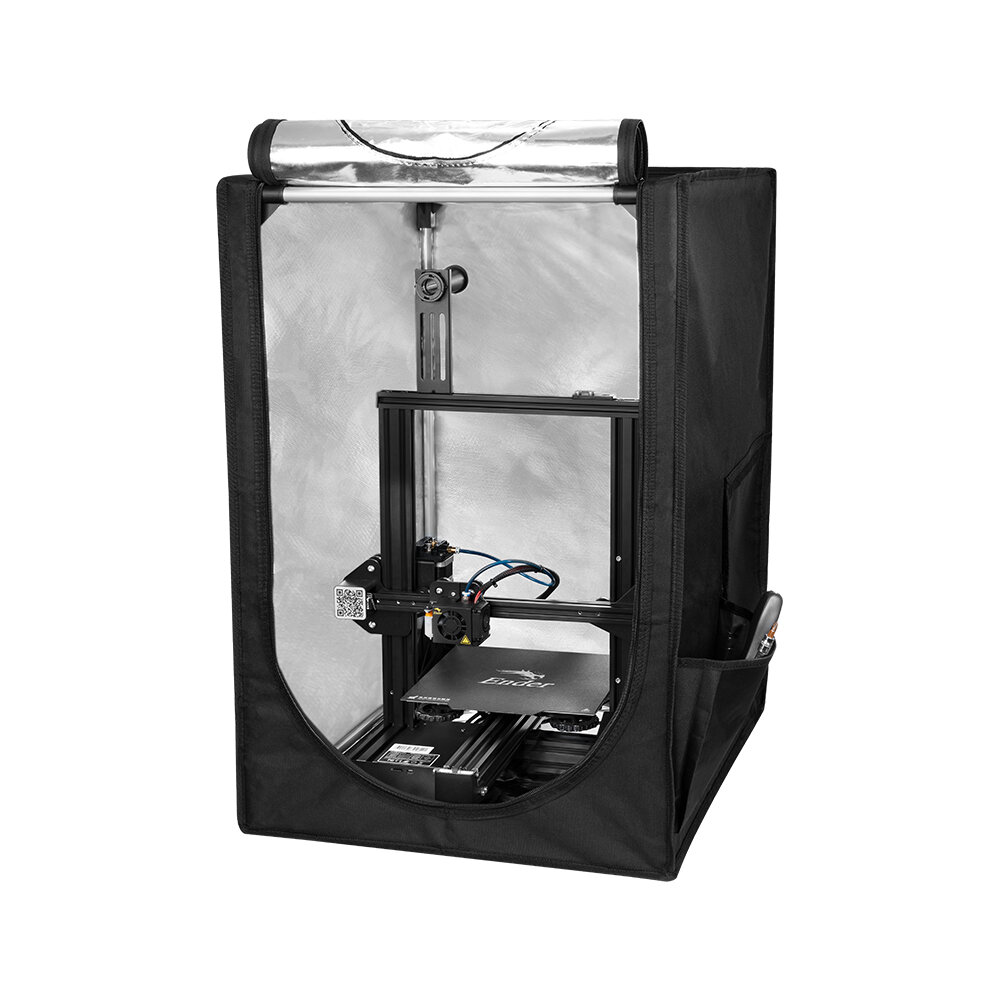 Whilst using this to print ABS and PETG I've have noticed a much better print, however its sheer size for me is a downer, I just reclaimed a large work area losing the S5 to lose it to this, for me its a no go. but the quality and construction are well thought out.

Eryone ULTRA Silk Filament Review – Is There A Difference