Creality Ender 5 3D Printer What Do We Think?

At first, the Creality Ender 5 might seem to be a box type 3D printer that has not much to offer. However, after reading this article, you will get to know that the printer is more than a box and offers great features to the users. So here is what we have gathered for the Creality Ender 5 CoreXY.

Specs and Features of the Creality Ender 5

Creality Ender 5 is very different from the Ender 3 in terms of the frame size. The Ender 5 has an outer dimension of 440 mm x 410 mm x 465 mm. With this size, the printer offers a moderate build volume of 220 mm x 220 mm x 300 mm. In case you are worried about creating space on your desktop, then you are right. However, as compared to Ender 3, the Ender 5 has kept the X and Y axes the same. But on the Z-axis, there is much more room when it comes to Ender 5.

To everyone’s surprise, the Y-axis motor of the Creality Ender 5  controls the motor drives to both sides of the gantry at the same time. This is done to make sure that you get a smooth movement. While the Z-axis is mounted in the middle of the bed with an 8-mm rod. When comparing with Ender 3, there is a slight difference between the axes. The print head of the Ender 3 is mounted on the Z-axis. Whereas, that of the Creality Ender 5 moves freely in the X and Y direction. As a result, the overall performance of the speed and quality is much better for the Creality Ender 5.

The magnetic bed of the Ender 5 tends to bake into the sheet. As a result, after a few prints, you will feel like the bed has been in use for a lot of years. Thus, you need to mentally prepare yourselves to order spares for the printer every now and then.

The Creality Ender 5 provides you with an SD card that contains Cura 15 or Cura 3.4.1 – Windows-only version. But on the other side, this is bad news for Mac and Linux users as there is no support. Moreover, the user will have to enter all the details about the printing manually. This is one reason that makes the printer not a very suitable one for beginners.

Like all other Creality models, the Creality Ender 5 has a wonderful price tag for beginner  3D printers. The printer is available for £349 on Amazon. This is perhaps the greatest feature of the printer.

To sum up, this amazing printer is offered at an extremely low range of under £400. In addition, there is an open frame, and thus the possibility of collision between the bed and the frame is almost eradicated. But on the downside, Creality needs to work on improving the platform compatibility of the printer. This will help users of Mac and Linux to experience the printer too. In addition, the baking of the printing bed is another feature that the company needs to work on. Thus, if you want to get a good 3D printer under $400, you can go for the Creality Ender 5.

Why not check out SUNLU TPU FILAMENT: Do You Really Need It? This Will Help You Decide! or how about Tianse Red Copper Silk PLA Filament Review

All3DP review of the Creality Ender 5 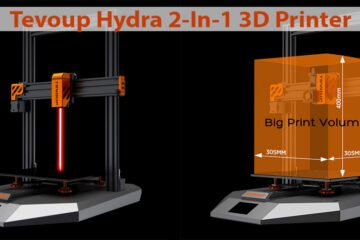