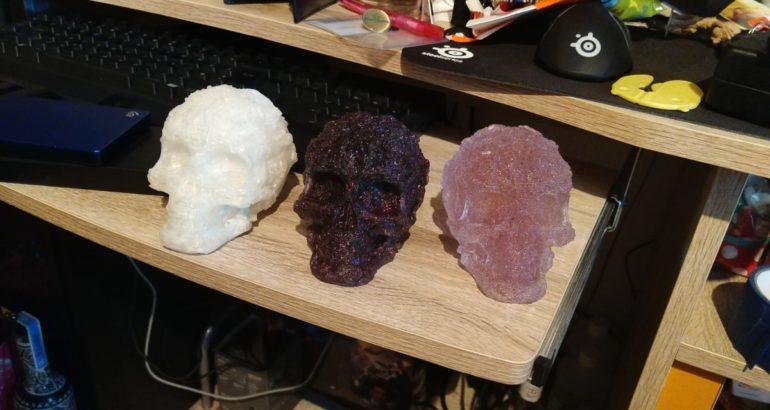 Creating a silicone mould from a 3D printed model

In this article, I will cover how I created a silicone mould from a 3D printed model. Come learn how and be inspired to make your own resin cast.

Products you will require to play along at home with:

Why was it challenging to use the Water Clear Casting resin you may ask?

Because I chose poorly, I picked a resin that needed mixed at either 1% or 2% hardener, which made a difference I found out. More hardener means it dries faster, which can cause cracks, keep more bubbles in and seemingly discolour the resin. Using less hardener came out better for me; it gave me time to shake out some bubbles. The resin also smelled incredibly strong. I had to do the casting in the garage, which is generally a good idea in case of spills and such.

You are choosing the perfect model.

Remember you’ll have to pull this out of a mould so something with dramatic edges, recesses or anything to get caught could be difficult. Check out the top 10 websites to help you find the perfect model. Ultimately pick something you love as you will have a mould till you bin or break it.

The Fancy Skull took around a day to 3D print with a size of 111mm long by 79mm wide and 84mm tall or 110% scale. I had no problems with Eryone Filament, there was support needed for this model mainly for the small overhangs. I went ahead and printed a box in vase mode slightly larger than the skull. In hindsight, I should have made it a few bottoms and side layers, as you’ll see below, it split and leaked.

Now making the mould was straightforward, apart from it leaking all over my printer and desk. Mixing the silicone was done by weight, which I found weird but comfortable enough. Mix it real good and pour it over your model in its container, smooth! Now let it sit overnight or at least for a few hours depending on the silicone you purchased.

It is a good idea to stick your model down as. Otherwise, it will float out if the silicon. Once the silicone mould is dry, remove it from the container and pull out your model. Some larger models may need small cuts on the outside corners of the silicon mould so it can flex and not rip. If you do cut the mould be careful not to go too deep.

Learn from my mistakes!

I made a few mistakes, so you don’t have to. For example when choosing or creating a container, make sure it is watertight… I wouldnt recomend you do what I did. Although if you’re not making a mess, you’re not having fun I guess…

I attempted to dye a red rose black to put in the resin and Failed.

Flowers in resin need to be dried or coated in something like wax to prevent them from reacting. Finally, it is a good idea to stick or weigh down your 3D printed model as mine floated in my first attempt.

Making the first cast was exciting. Mixing the chemicals and a good bit of glitter and pouring it into the silicone mould I had made gave me the feeling that drives us to be makers! Finally, let the resin set this took an hour or two for me, but I left it longer to be safe. Removing the resin cast from the silicone mould isn’t too tricky work it out and don’t drop it!

I removed my first resin cast skull from the mould, and it looked great. Every detail from the 3D printed model came through to the final product! Unfortunately, this included layer lines. This resin cast is little dark either from too much black and purple glitter or from too much hardener, either way, I had more resin and glitter so on to gen two.

Casting the resin was easier the second time around. This time I added a tiny amount of purple glitter and as little hardener as I thought possible to set it and wow! Once dry, out came a beautiful clear, slightly glittery resin skull. Still layer lines so that will be fixed next time I make a mould. The fancy skull is fantastic to put lights under to shine colours through. You could put lights inside the cast if desired, all you would need to do is wait till the resin semi-hardens so that they don’t just sink.

In conclusion, this is a fantastic project to do! Whoever the end product is for or if you like to experience making new things. The whole process is not overly challenging and very rewarding. Leaving you with a resin cast of the model you made with whatever you added into your resin. I’m hoping to try mix glow in the dark powder next time. You can add anything from glitter, a colourant, an object like a coin or something you like to preserve forever.

If you enjoyed this why not read Kennet McCoy’s article on lithophanes, turning your photos to 3D prints!

Posted by : Ewan Hutchison
Hi! I'm Ewan a computing graduate from Scotland. I got in to 3D printing a few years and I'm learning every day.
Previous Article :

10 3D Printer Accessories You Need to Have